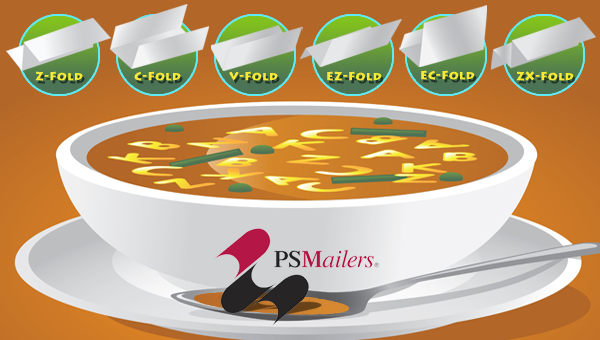 Apologies for planting the Campbell’s Soup earworm in your head. (At least I didn’t mention your favorite bologna…you know, the one with a first name and last name…or a certain cat food mix that will leave you mentally meowing in double time). But you see, I was reviewing the many fold styles available for use with PSMailers… C-fold, V-fold, ZX-fold… and I realized this alphabet soup of letters likely stirs up a hot cup of confusion for many users. I figured that PSMailers Guy fans (I know you’re out there) would appreciate having these spelled out clearly.

Below are the six available fold styles of PSMailers documents:

To learn more about PSMailers documents contact us @ www.psmailers.com\contact-us\sales-form\  or email support@psmailers.com for more information. With so many styles and imprint options to choose from, you’ll be thinking “mmm mmm good!”

Yours in blogging, from soup to nuts