Is your self-mailer system an Apolo Ohno... or Eddie the Eagle? 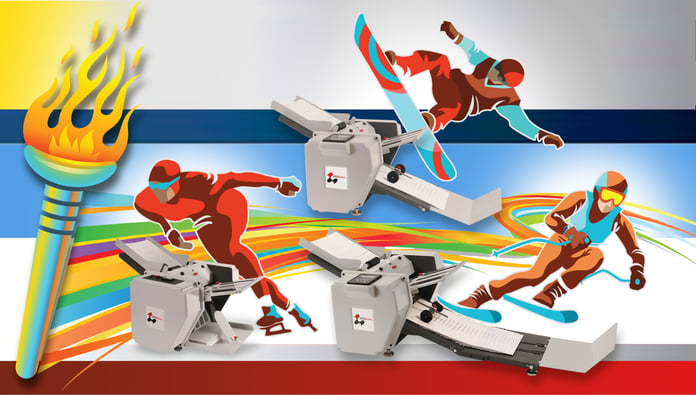 The Winter Olympic games are a true inspiration to aspiring young athletes, sports fans, and couch potatoes alike (I should know). Watching the amazing feats of strength, speed and agility performed on ice and snow by such U.S. Olympic greats as Apolo Ohno, Shaun White, Picabo Street, Dorothy Hamill, Eric Heiden, to name a few, has been one of my favorite past-times every four years. I liken their impressive athleticism to a few other top performers near and dear to me – PSMailers.

Take for instance the PSM1800. This compact but mighty machine could be considered the Apolo Ohno of PSMailers. Ohno earned a remarkable eight Olympic medals as a short track speed skater; the PSM1800 boasts a processing capacity of 1,800 documents per hour, and a monthly duty cycle of 10,000. This makes PSM1800 a top performer for smaller offices processing as few as 6,500 documents per year, with a payback that makes it well worth the investment.

The tricked out PSM3000 is the Shaun White of the lineup. White, a now three-time Olympic gold medal snowboarder, holds the record for the highest score in the men's halfpipe at the Winter Olympics; while the PSM3000 integrated folder/sealer delivers a processing throughput of 3,000 documents per hour and duty cycle of 25,000 per month. Gold-worthy document processing for smaller organizations that require streamlined Olympic performance from a desktop solution.

If you have a need for speed, the mighty PSM10K is the Picabo Street of self-sealing systems. Alpine skier Street won the super giant slalom (“super G”) speed skiing event at the 1998 Winter Olympics. The high-volume PSM10K with 36” conveyor outpaces other systems handing up to 10,000 documents per hour, with a 200,000 monthly duty cycle.

So before the 2018 Winter Olympics torch flame goes out, take a second look at your current pressure sealer machines. Can they compete? If yours are more of “Eddie the Eagle” than Eric Heiden, look to psmailers.com for a winning lineup.